Brain tumours have a number of characteristics setting them apart from other tumours, both in children and adults. After leukaemia, brain tumours are the most frequent type of cancer in children, whereas they are rare in adults. They rarely spread beyond the nervous system. Although a key factor is that the aggressive types are of course less favourable in outcome, their position in the brain, as well as the age at which they are diagnosed, often plays an important role in the prognosis too. 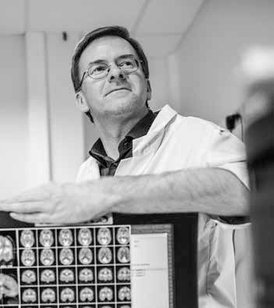 Thus, a relatively benign tumour can still cause significant symptoms in the short term, if its location makes surgery impossible. Since children’s brains are still in rapid development, both the tumour itself and the treatment may cause brain damage. The younger the child, the higher the risk of damage. An early and accurate diagnosis of brain tumours, as well as of any relapses, is therefore essential. Even though children have a better prognosis than adults and some children may heal from a brain tumour without any apparent consequences, most of them do suffer residual injuries with some degree of severity, either as a result of the tumour itself and/or from the necessary treatment. Therefore, a brain tumour can have a major impact, not only on the child itself, but also on the family as a whole.

Nuclear medicine is a medical speciality involving the use of radioactive isotopes as markers to diagnose diseases. These markers emit radiation that can be measured or captured and that is then converted into images. Sometimes, these isotopes can also be used for treatment. Unlike with “ordinary” imaging techniques, such as CT and NMR, these isotopes can also be combined with other molecules so as to give an idea of the activity of a tumour. This may be of major importance, for instance when a tumour is not really growing and is not changing on a CT or NMI scan, even though it is becoming more active (and aggressive), thus requiring additional treatment.

A speciality closely related to nuclear medicine is radiotherapy. Radiotherapy usually involves using external radiation sources to treat a tumour from different angles. In exceptional cases, radiation sources are seeded inside a tumour (which is known as brachytherapy), which obviously is not always possible in the brain. In both cases, however, it is of the utmost importance that the growth of a tumour be monitored with medical imaging techniques, such as CT, NMR and nuclear medicine.

Hoping for a breakthrough

Brain tumours are often very aggressive and difficult to treat. Scientists at Ghent University are currently exploring a radiation method allowing them to target the most active parts of a tumour, and imaging techniques using new markers are playing a major role in this research.

There are many different types of brain tumours, ranging from benign growths through malignant low-grade tumours to aggressive, high-grade glioblastomas.

“Unfortunately, the latter are among the most aggressive tumours known to man,” says Professor Tom Boterberg, a member of the Department for Radiation Oncology and Experimental Cancer Research at Ghent University. “Compared to other types of cancer, the chances of surviving this particular kind of brain tumour are very slim. With most cancers, 60% of patients are still alive after five years, whereas the five-year survival rate for these brain tumours is less than 5%.”

Tom Boterberg: “When you put a glioblastoma under a microscope, you see many cells dividing. Yet why these tumours in particular are so aggressive is something we still don’t know. Unlike with lung cancer, for instance, we don’t even know what causes them either, rendering prevention impossible. On top of this, they are rare: a GP might come across one patient suffering from this type of brain tumour in the course of his or her entire career. That rarity is a fortunate thing, of course, but it also complicates the sort of large-scale research that is possible for breast cancer.

In addition, the treatment is more difficult than it is in other parts of the body. You can’t just cut away brain tissue without sometimes causing damage, sometimes considerable damage. Moreover, most types of chemotherapy don’t work so well on the brain, owing to the blood-brain barrier, a natural defence system that prevents harmful substances from entering the brain. Unfortunately, this also complicates the penetration of chemotherapeutic agents.”

In order to improve treatment, Ghent University is mainly focussing on imaging techniques. Why?

Professor Ingeborg Goethals (Department of Radiology and Nuclear Medicine): “Imaging techniques such as MRI and PET scans are chiefly important in the diagnostic process. We want to find out two things: what do the brain and the lesion look like? And, above all: how active are the tumour cells, how quickly are they dividing?

People often have a wrong idea of brain tumours: they see them as single units that function in a uniform way. In fact, they are heterogeneous lesions. A tumour may be much more active in some places than in others. A PET scan allows you to map that activity in detail, which is important knowledge to have when the neurosurgeon takes a biopsy (a sample of tumour tissue) to have it analysed by the pathologist. It goes without saying that a biopsy is best taken from the most active part of the tumour. Otherwise, you’d get a completely false impression of the tumour and the right treatment method.”

PET scans have been around for a long time, haven’t they?

Tom Boterberg: “Since the 1970s. What is of the utmost importance is the marker used for the PET scan. A marker is a substance which is injected and which healthy tissue and tumours each absorb in a different way. By making that substance slightly radioactive, it becomes visible on the scan. With most types of cancer, glucose (a fancy name for ordinary sugar) is used. For brain scans, however, glucose is not very useful, because brain cells are highly active too. If you do a brain scan with glucose as a marker, the whole area will look active. That’s why we need more specific markers.”

Ingeborg Goethals: “A great deal of our research is aimed at finding markers that enable us to map brain tumour activity in a lot of detail, from low to high activity levels and everything in between. That isn’t an easy thing to do. You have to find out what receptors are present on tumour cells, what substances match them like keys, and then you have to examine whether that key-lock mechanism continues to function once you make the substance radioactive. It’s that final step that has proved to be particularly difficult.

When it comes to brain scans, our research focusses on amino acids. We especially want to gain a better insight into the uptake mechanism. Choline, although not an amino acid, is nevertheless particularly useful in brain tumour imaging: unlike normal brain tissue, certain tumours take it up very well. There’s a drawback, though: we have found out that choline is also taken up by the blood vessels in the cerebral cavities. If that’s the area where you need to examine a tumour, then choline isn’t very useful.”

Is Ghent University a pioneer in that field of research?

Tom Boterberg: Our work is pioneering in that we don’t only use imaging techniques to map tumours: we also use them to tailor the radiotherapy treatment accordingly.

As long ago as the 1970s to 1980s, scientists were trying to obtain better results by using higher doses of radiation on tumours. As it turned out, the patients’ chances of survival increased along with the dose, but only up to a certain level – probably because beyond that dose healthy brain tissue is exposed to too much radiation. The tumour cells die off, but unfortunately so does the healthy tissue.

Our theory is that we can increase the chances of survival if we succeed in increasing the dose not across the entire tumour but only on the areas where it’s most active. Since we used to be unable to map tumour activity in enough detail, that just wasn’t possible, but it is now.”

Ingeborg Goethals: “It’s still too soon to tell. The research has only just begun, but the theoretical basis is sound and we have the tools at our disposal. So we’re hopeful. In the meantime, we’re already working on a next step: we’ve developed a marker that enables us to map the oxygen levels of a tumour. Tumour areas low in oxygen don’t respond well to radiotherapy. So extra radiation might be useful on the parts of the tumour with low oxygen levels. As you can see, we’re mapping more and more tumour characteristics as we progress.”

Tom Boterberg: “In fact, we are using the very heterogeneity of the tumour to optimise the treatment of it. That’s unprecedented: current radiation treatments still target the tumour as a whole.

Let’s be honest: the chances of survival of patients suffering from brain tumours have barely increased over the past few years. The last real breakthrough took place fifteen years ago, when a particular type of existing chemotherapy proved to be useful for treating brain tumours also. Since then, we’ve seen many new products, but they haven’t been of much help to patients. If our approach works, it could have a major impact – precisely because the survival rate is so low today.”

This research is a spin-off of your research into innovative markers, which is partly funded by the Luka Hemelaere Foundation. Why is that funding so important?

Ingeborg Goethals: “We really need those funds, especially now the financial climate has radically changed. In the past, when you submitted a project to institutions such as the FWO (Flemish Research Fund) or the IWT (Flemish Agency for Innovation), the odds of receiving a grant were about one in three. Today, those odds are substantially lower. So, for our research, we are becoming ever more dependent on external funding, for instance from Cancer Foundations or private sponsors such as the Lux Luka Foundation. The Foundation supported the development of choline, one of the PET markers enabling us to map tumours better. Developing such markers is a costly challenge.”

Tom Boterberg: “The English-speaking world has more of a tradition of charities. I’ve recently visited a Canadian hospital and I noticed all sorts of signs about donations they’d received. It isn’t our aim to have our research funded entirely by private donors, though. We do have basic funding, but if we are short of funds, we are glad that the Lux Luka Foundation can chip in with some financial support. Eventually, the research that is paid for with that money results in scientific publications, which in turn increase the odds of receiving ‘official’ funding.”